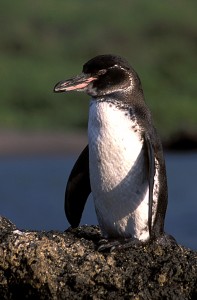 The Galapagos penguin, Spheniscus mendiculus. This species is listed as Endangered by the IUCN Red List. Photo by Haroldo Castro, courtesy Conservation International.

The coastal wildlife of the Galapagos Islands – arguably the world’s most celebrated environmental treasure – has suffered outright transformations due to a combination of climate change and over fishing, with several species of marine plants and animals believed to have gone extinct and many others seriously threatened, a new report reveals today.

The report, which is published today in the scientific journal Global Change Biology and can be viewed here, outlines the massive impact that the increasing ocean temperatures associated with strong El Nino events have had on the archipelago which, coupled with fishing, tourism and other human activities have changed Darwin’s living laboratory forever.

The report follows a major scientific meeting, convened by the Ecuadorian Ministry of Environment, the Galápagos National Park Service, Conservation International, World Wildlife Fund, and other organizations, to assess the vulnerability of the Islands to climate change. Experts established that the El Nino weather cycle, possibly aggravated by global climate change, and combined with other human impacts has systematically impoverished the Galápagos marine environment in just a few decades.

Coral reefs and kelp beds have been eliminated, once-abundant marine species such as the Galápagos black-spotted damselfish (Azurina eupalama), Galápagos stringweed (Bifurcaria galapagensis), as well as the 24-rayed sunstar (Heliaster solaris) are thought to be extinct, and dozens of others – including the beloved Galapagos penguin – are within a hairsbreadth of annihilation. Based on the International Union for the Conservation of Nature Red List, two species are “probably” extinct, another 7 “possibly” extinct, and a further 36 Vulnerable, Endangered or Critically Endangered. Climate change is predicted to make this devastating set of conditions more frequent and intense in the region.

On top of this, by comparing heavily to lightly fished areas in the Galapagos Marine Reserve, scientists learned that overfishing weakened the web of life in Galapagos through cascading effects of the expansion of sea urchin populations, which in turn erode its resilience.

The scientists that co-authored the report hope that the findings will demonstrate the urgency of taking action so that delegates at the international climate conference in Copenhagen later this month make tough commitments to adequately finance both measures to significantly reduce greenhouse gas emissions and to urgently address the climate adaptation needs of vulnerable communities and ecosystems.

Report coauthor Scott Henderson, Conservation International’s Regional Marine Conservation Director in the Eastern Tropical Pacific said: “If marine species are going extinct in one of the most famous, and most cherished World Heritage Sites, what is happening in the rest of the World that has been so little studied? It is time we recognize that the Ocean has limits just as the rain forests of the Amazon, the rivers of Europe, the ice sheets of the Arctic and the grasslands of the Great Plains. For seas to thrive we need increased efforts to slow climate change, more, bigger and better managed marine protected areas (MPAs) and better managed fishing activities outside MPAs.”

Authors of the report believe that the Galápagos Islands are a “canary in a coalmine” – a telling indicator of what the world has in store under global warming. The archipelago lies at the convergence of several major ocean currents, which allows a diverse and unique set of ecosystems to co-exist  – from penguins to marine iguanas to corals. However, during El Nino years ocean temperatures throughout the Galápagos Marine Reserve rise a few degrees. These increases are roughly in line with those predicted under climate change scenarios for this region. During these years scientists are able to get a glimpse into the future of how wildlife and the people that depend on the environment might fare under climate change conditions.

Sylvia Earle, one of the paper’s coauthors and one of the foremost authorities on marine issues said: “Nowhere on Earth are the combined impacts of climate change and overfishing more clearly defined than in the Galapagos Islands where unique assemblages of wildlife live on the sharp edge of change. Decades of data link recent fishing pressures to disruption of the islands’ fine-tuned systems, making them more vulnerable to natural –and anthropogenic changes in climate.”

Professor Les Kaufmann from Boston University said: “The Galapagos, the Rosetta Stone of evolution, is now teaching us the far-reaching impacts of climate change on ocean ecosystems. Though too late to stop, we now know that the impacts of climate change can be softened by cutting back on fishing.  The wildlife we eat today was part of the inner workings of an ecosystem which was under stress from global climate change and when these ecosystems are damaged, species and livelihoods can vanish in a heartbeat.”

For further details or a PDF of the full report contact: