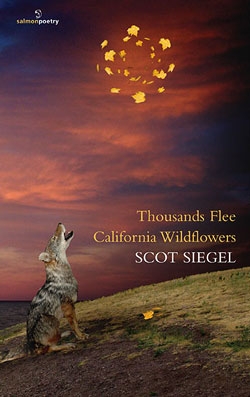 In many ways, Scot Siegel’s new collection of poetry masquerades as a solid collection of free verse knitted to the geography of California. Barstow and Sacramento appear (along with many other familiar California locales) as do the wildfires and wildlife of that tall, West Coast state, but there’s more to Siegel’s writing than meets the eye. Both the tongue-in-cheek title, Thousands Flee California Wildflowers, and the sparse collage-like cover with its hillside, its sunset, its coyote howling at a celestial-whirl of yellow leaves hint at the even slightly surrealistic nature of his work.

These poems are stories both narrative and pointillist, and it’s the intersection of those two styles where Siegel takes the reader, never allowing the work to land in one place or the other. In the first poem, “Reasons I Resisted Kissing Your Sister,” he writes:

And do you remember getting lost in a storm sewer, the roar
of Oakland Avenue above our heads. Then a pinpoint of light
through a catch basin that was welded shut; I was tempted
to kiss her then.

This is about as close as you’ll get to a prose poem, about as much of a sense of a complete sentence as exists in the book. There are a few poems like this, but there are as many or more that read imagistically. In “Farallones (Gulls in the Absence of Stars),” a long poem with 13 short sections, Siegel writes:

messengers of salt and soot in the storm, gulls

This is gorgeous, lyrical writing with the rhythm of the weather itself, stresses swaying and hitting like the rain: regular, repetitive, reassuring.

And it’s not that the imagistic work doesn’t carry narrative; it does, and there are common veins and themes. Coming-of-age poems are here, as are love poems with binoculars to the poignancies and failures of relationships. The surreal aspect—and it’s not surrealism a la Dali, with absurd juxtapositions and seemingly acid-induced warping—is the way Siegel pushes his work one small step further, one final line that twists a poem often darkly, tragically, but appropriately and with insight that grips the reader. These aren’t Anne Sexton’s human tragedies, nor are they Gary Snyder’s appreciations of the wind in the white pines. They’re in between. They’re both. In the poem, “Song of the California Wildfire 80% Contained,” Siegel examines a narcissistic affair, a tragic comparison to the fire, and finishes:

They couldn’t outrun
their own flames

Now nothing
but cinders remain:

drab dabs of ash
on their lips

A final period doesn’t exist in the poem. The word “future” lifts and trails off like a stunned breath. So many poets might have left a quite satisfactory poem ending somewhere on the image of lips covered with ash. But Siegel takes you to an unfinished future, something we all have, something we can’t predict, something without the punctuation; it’s edgy, and it opens the poem up. It’s dark too: not just the relationship is doomed, but even the future has been charred.

Like the missing periods above, Siegel plays with punctuation by leaving it out. This is as common in these poems as the fire and arson metaphor. The final period is something Siegel eschews in many places, and the effect on the breath and pacing of the lines tends toward uncertainty and connection. In “Out Here,” Siegel looks at the desert landscape like this:

they kick-up the brine shrimp, & you lick
the bitter crust

You heard there is a diner but the herd has wandered

The images and linkages are surreal and creative, conjuring desert but stretching the landscape beyond what might be the simplicity of a desert landscape a la Ansel Adams. This is the Adams landscape with a good dose of Charles Simic mixed in.

Siegel’s poem “Chris, 1975” is a coming-of-age poem that turns into a direct look at the Vietnam War. What’s clever is the poem really is a good coming-of-age poem—boys, lighters, cigars—and the war references are few and easily overlooked were it not for the ending that spins the eye to a sudden wider, obvious perspective:

Chris had an affinity for
Hitler. I didn’t

understand this: Chris,
whose father had

This poem, early in the book, complex yet compact, simple yet deep, might be easy to point to and say, Here’s the perfect one, the poster-child. But one can’t really make that claim given the way Siegel pushes form and language elsewhere.

It’s interesting reading through the variations in Siegel’s writing, and it takes work from the reader, but good work, the work that comes from thinking about poems that shift when you least expect. His world is often dark or softly tragic, but with gratitude, reflection, and at times humor. Each of these poems are Siegel’s look at the “pinpoint of light” he’s seeing in that first poem. The fascination isn’t really whether he ever kisses the girl; rather, what on Earth do we see in that small speck of white light, that momentary window into the rushing world above us?

Andrew C. Gottlieb is the reviews editor for Terrain.org. His work can be found online, in many print journals, and in his poetry chapbook Halflives (New Michigan Press.) Find him at www.AndrewCGottlieb.com.