My partner and I recently moved into the first floor of a grand old Georgian house. Above us live three beautiful girls—ages 7, 10, 11—and their equally beautiful mom. Together with my dog, Ari, we make an eclectic but happy household.

This is not to say that this living arrangement has not been without its struggles.

Within two weeks of arriving, Ari summarily killed one of the girls’ beloved guinea pigs. The rest of the day was dedicated to an elaborate funeral befitting heads of state, beautifully orchestrated in all of its punctiliousness by the three beautiful weeping girls. They placed the guinea pig in a homemade coffin, where he lay on a bed of hay. They made him a bouquet of forget-me-nots and placed a single clover blossom in his mouth so that he would never grow hungry. After the multi-act interment, we and the other funeral guests ran around the yard and ate French lemon cookies and drank tea and wine because, really, how else can one say goodbye to a guinea pig? 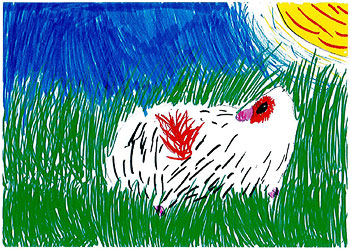 A few weeks later, Ari dispatched the second of the two guinea pigs, followed by a much treasured mouse puppet and then a stuffed bunny. In all three cases, she left the remains where they lay and then moved on to whatever captivated her in the now-present moment. When met with the grief-stricken girls, she looked confused, as if she could not possibly fathom why they were upset. And really, why would she fathom such a thing? The death of the guinea pigs and the disemboweling of the puppet and bunny were already in the past and, thus, no longer existed in her canine reality.

That fact—along with Ari’s very poor English skills—meant that we couldn’t ask the dog what had motivated her in these situations. I’ve written in the past about Ari’s predilection for the natural world—and all of its inhabitants. This was a decidedly new side to my naturalist dog. And whether she thought her killing spree was an act of protective rodent extermination or just a fun time is anyone’s guess. As for the funerals, they grew increasingly brief, and the romping after-parties were abandoned altogether. The girls, it seemed, were becoming accustomed to loss. And they accepted each offing with a grace far beyond their years.

My friend Margot was somewhat more circumspect. She gave me a children’s book called Everybody’s Somebody’s Lunch and a quick piece of advice: “Maybe the girls ought to consider a pet higher up the prey base.”

But moving up the prey base has never really been a priority for these three beautiful girls. And that presents a not insignificant need for vigilance in me. Their remaining pets—the ones not yet executed by my otherwise perfect dog—are a flock of chickens that live in our side yard. The girls have reared these chickens from eggs, pledging before the birds had ever even hatched that they would be destined for careers that did not include baking, stewing, breading, or frying. In a moment of great epicurean irony, they also gave the members of this flock names like Pepper and Ruffles and Sugar and Banana.

Pepper—a barred rock—became the quick and immediate favorite among our household, and the girls lovingly encouraged her leadership qualities and general affability. But while these attributes continued to grow and develop over the summer, Pepper’s femininity did not. In fact, she soon proved a he: an inescapable fact we were forced to concede after the third morning of proud crowing.

This manifestation of sexuality presented yet another immediate and serious problem. Our little seaside town of Belfast, Maine is pretty liberal when it comes to most things. And the fact that the girls’ flock lives in town at all—not to mention that they are regularly visited by Semolina and Fishy, two full-grown hens so free range that they wander about the neighborhood like Victorian ladies with calling cards—says a lot about the tolerance of this place.

Tolerance is often bred by familiarity, and that is certainly true when it comes to our town’s acceptance of avian residents. For a good part of the mid-20th century, Belfast was one of the largest poultry producers in the country. Our bay—now a favorite tourist destination for sailboats and cruise ships – was once so filled with offal that it was said to run red with blood. Old timers here swear an Atlantis-like floating island of chicken feet and skin and waste would come and go with each tide. They recall streets clogged with feathers and dozens of errant hens: half-crazed escapees from the processing plant that soon wound up in the pot of one intrepid citizen or another.

Semolina and Fishy perambulating as fowl flâneuse, then, isn’t about to spark concern in a town as steeled to the production of breasts and drumsticks as ours. While Belfast may be willing to accommodate strolling chickens and a hen house in every yard, however, it draws the line at cockcrowing.

That meant Pepper had to go. It also meant that my three beautiful neighbors were facing yet another loss of yet another pet. And they were rightfully concerned that Pepper, too, was about to become somebody’s meal.

My attempts to assist in the relocation of Pepper did little to mitigate these fears. A post on Facebook asking for help finding a new home for the rooster were met with recipes for fricassee and quips about stuffing. Things were looking grim.

Then my good friend Bill Roorbach answered the cockerel call. The Roorbachs’ stately old rooster had recently died, and their flock was in need of a new man about the house. Better still, Bill wrote to me over email, their previous rooster had also been a barred rock. Best yet, the adjudicator of all things chicken in their house was Bill’s 11-year-old daughter, who just happened to be the same age as Pepper’s primary caregiver.

It was a match made in poultry heaven.

And so the three beautiful girls and I packed Pepper in an oversized dog food box, which the girls explained was the chosen carrier for moving all animals to and from their house, and we set out on the three-hour drive to Bill’s farm in Maine’s western mountains.

In the interest of full disclosure, I admit that although I have always considered Bill to be my good friend, the two of us had never actually met before this relocation project. Instead, ours was more a relationship of affinity: we both share a great love for our mutual friend David Gessner; we are both writers; and we both live in Maine. Thanks to social networking, we follow each other’s lives by way of 140-character updates and the occasional photograph of a particularly lovely eggplant or the first strawberry of the season. On our drive then, I didn’t have a great deal to tell the girls about Bill’s farm or his daughter or whether there’d be other animals there to meet.

They didn’t seem overly concerned by this and, instead, ate their cheese sandwiches and took turns DJing our drive music and, of course, checking in on Pepper who, by all counts, did not seem to be at all concerned about being held captive in a box that smelled of dried poultry meal and Tocopherols and whatever else is contained in the dog food that had once resided where this rooster now sat.

(And here the girls want me to be sure I tell you that they made paper dolls to serve as chicken guardians for the trip and that these dolls included some of the major characters from both The Lord of the Rings and The Hunger Games. And that Frodo Baggins, who was serving as chicken guard for the third and final leg of our drive, was summarily snatched by Pepper, who surely would have eaten the hobbit, had it not been for the eldest girl’s calm and swift action in rescuing him from the rooster.)

Understandably, the paper Frodo did not seem overly sentimental in the departure of Pepper. But the girls were another story. And they became visibly shy—almost reluctant, even—when we tumbled out of the car at Pepper’s new home. 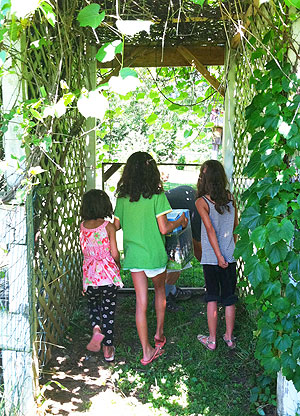 Happily, Bill is a wizard when it comes to both chickens and beautiful girls. He spent over an hour giving us a tour of the hen house and chicken yard, telling us about each member of his flock and demonstrating how he would introduce Pepper first to the pullets the rooster’s own age and then, eventually, to the more seasoned ladies who rule this roost.

Once Bill and the girls were satisfied that this situation would be a great one for Pepper, the five of us ducked under Bill’s grape arbor and into the yard Pepper would now call home. We tossed him into the run along with a handful of blueberries—a housewarming and going-away gift all at the time—and watched him get settled. By the time Pepper and the youngest hens were acclimated to one another, Bill’s daughter had returned from her day at drama camp. And so we all took a tour of their garden and then went inside, where the girls played with the Roorbach family guinea pig while Bill and his wife and I ate homemade maple syrup by the teaspoon in their kitchen and made plans for a reunion dinner sometime soon.

Since then, Bill reports that he and Pepper have become fast friends. And that while it took some tough love on the part of the elder hens, this young cockerel eventually came to understand that he isn’t actually the boss of much of anyone.

Back in Belfast, three other members of our household flock have presented themselves as roosters. Two of them were relocated to a local goat farm where, I regret to write, the one named Sugar met his demise in the mouth of a coyote. As for the remaining pullets, they’ve learned to climb the large elderberry bush next to their pen, and have thus determined not only how to become as free range as Semolina and Fishy, but also how to avoid becoming a meal for my ever-hopeful dog.

We still don’t have any eggs, but that doesn’t seem to matter much to anyone—particularly the girls. They are far more interested in persuading their mom that the flock need not overwinter with the laying hens at their aunt’s famous restaurant—that, in fact, these four ladies are as permanent a part of the household as the girls, or Colin and I, or Ari.

And on that last point they are resolute. A few days ago, the three girls came down to help me bake Ari some biscuits. When I gave them their choice of cookie cutters, the middle-aged girl rejected them all. Flummoxed, I asked this beautiful girl in what shape we ought to cut the biscuits then. She answered with an elfin grin: “Guinea pigs.”

So it goes, wrote Kurt Vonnegut. When washing rice, save the rice, the sand, and the water, said Zen Master Dogen. Treat the rice as if it were your own eye. Because really, Margot couldn’t be more right.  Whether we know it or not, we all eat with one ineluctable reality: everyone is someone’s lunch.

Kathryn Miles was a professor of environmental writing at Unity College and editor-in-chief of Hawk & Handsaw: The Journal of Creative Sustainability. She is  the author of Adventures with Ari (Skyhorse/W.W. Norton) and All Standing: The Remarkable Story of the Jeanie Johnston, The Legendary Irish Famine Ship, which will be published by Simon & Schuster later this year.