It was Dolores Olivarez’s monthly habit to hike to the top of Sentinel Peak—otherwise known as “A” Mountain. University of Arizona students had placed a huge letter “A” near its top, and it had soon become A Mountain to locals.
This story is excerpted from Susan Feather’s Threshold (Fireship Press, 2016) and is reprinted here by permission of the author. 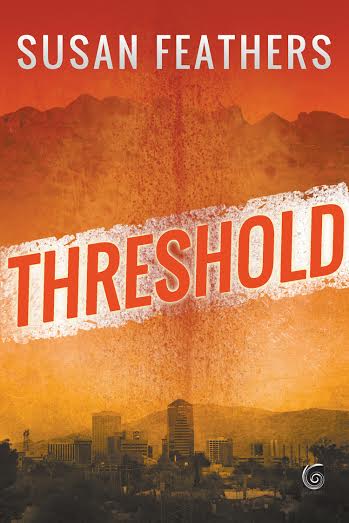 In the darkness of a moonless night, the ghost cat creeps across the U.S.–Mexico border and through a farmer’s field just as a small child wanders into its path. Not far away, Sonya Morales, a border agent, struggles to escape from her drug cartel kidnappers. Confronted by crisis in their own world, climate scientists, politicians, and desert museum curators face the biggest challenge man can encounter—no water, anywhere. In the barrios, families and community leaders band together as they face unbearable heat and the crushing weight of the gangs that intimidate them. Amidst the turmoil, three teens navigate adolescence to become leaders in a new world. With shifting sand underfoot, characters follow their intuition and learn new skills as they chart a way into a viable future. Threshold will make you think while it celebrates the enduring nature of communities as they search for what is lasting and true.

Now in her mid-30s, she felt determined not only to stay fit but also to continue demonstrating the faith instilled in her by her mother and grandmother. Combining these two undertakings became her signature blend, which on this hot summer’s day presented a significant challenge. This was not the season most hikers chose to ascend A Mountain or its eastern neighbor, Tumamoc Hill.

Both mountains—favorites among hikers—had been formed of lava flows from ancient volcanic eruptions that had also created the Tucson Mountains. These twin hills had been home to Tucson’s earliest inhabitants.

For Dolores, a woman respectful of ancestors, the steps up A Mountain were sacred and intentional. Today she parked her car in front of her aunt Consuela’s house, with its tiny front yard and Virgen de Guadalupe statue. Bunches of miniature yellow roses tumbled alongside the rusting wrought-iron fence, basking in the dry, warm air. It was quiet at 6 a.m. Not even the slumbering desert bees that loved these roses were awake.

Dolores imagined her plump auntie snuggled in bed and smiled. Tightening the drawstring of her desert hat, she set off on her pilgrimage and began her recitation of the Rosary, starting with the Apostles’ Creed, one “Our Father,” three Hail Marys, and a “Glory Be.” Dolores would complete a simple Rosary, reciting a prayer followed by ten Hail Marys, as she held each tiny bead on her Carmelite rosary—a gift from her grandmother—all the while trekking up the spiraling mountain road.

A covey of quail scurried across the road in front of her, surprised by her presence. Leading the family, the male bellowed a warning from his rufous chest, a slim top-knot of black feathers waving distraction. Behind him a dozen diminutive copies ran like windup toys across the road, followed by a plump brown female.

The modest adobe homes, once gaily painted and maintained with love and pride, were pale remnants of a more vibrant time. Old mesquites cast meager shadows of their once-full canopies.

Not far from there, Barrio Sonombre—Tucson’s first barrio—held fast at the base of Sentinel Peak. Dolores paid homage to the original Mexican colonia who had brought modern-day Tucson into being. The early business leaders from Sonora, Mexico, had brought the traditions of Mexican and Spanish culture to Spain’s northernmost outpost on the Santa Cruz River. The early founders had continued tenaciously to develop the city long after the Gadsden Purchase had ceded the land to los Estados Unidos. Up through 1920, Tucson had remained a Mexican city.

Beginning at the base of the mountain, where the Santa Cruz River had once flowed, Dolores traced the city’s history with her eyes and mind with each twist and turn of the road.

She passed the places on Sentinel Peak where Tucson’s first African-American community had lived in the mid-19th century. Around the next bend she passed a few ranch-style homes from the era of large-scale farming that had begun when the Colorado River was diverted for irrigation of industrial-sized farming operations. The little Mexican milpas—small plots of corn that sustained whole families—had gradually disappeared in the competition for water rights.

By now she was really feeling the sun’s intense heat. Stopping under the shade of a lacy-leafed palo verde tree, she drank some water and prayed: “Hail Mary, full of grace, the Lord is with thee. Blessed art thou among women, and blessed is the fruit of thy womb, Jesus. Holy Mary, Mother of God, pray for us sinners, now and at the hour of our death. Amen.”

She poured a little water onto her bandana, an act that felt like a sacrament. Water, the precious blood. Then she tied the wet scarf around her neck, feeling the refreshing cool as heat wicked away from her body into the cloth. She set off up the road toward the end of the “20th century.” This tier of the mountain showcased a few modern condos designed for maximum cooling and passive solar heating. Electric cars (among the more common SUVs) filled the garages of some of the professionals and artists who worked in the nearby downtown area. Walking up the mountain to this point was an exercise in the memory of origins. Dolores recited another verse, this time in her native language.

Eight Hail Marys left to go. After a long swig of water, Dolores pressed on. Heat and exertion were causing her to sweat profusely. Again and again she paused to drink water and cool her face and neck with her bandana. In her left hand the delicate rosary exuded the scent of pressed roses, refreshing her in her commitment to make it to the summit.

The road snaked sharply upward, giving her various viewpoints: the Catalina Mountains to the north, the Rincons to the east, and the Santa Ritas to her south. She paid silent homage to Baboquivari Peak in the southwest, the sacred home of I’itoi, the mythical creator of the ancient Hohokam people—ancestors of the modern Tohono O’odham Nation.

On her first glimpse of the cityscape, the strain of the hike became accompanied by doubt. For the first time Dolores questioned the wisdom of her habitual climb. By now her white blouse was soaked. Perspiration poured down her cheeks, neck, and back. She opened a packet of mineral salts and poured it into her other water bottle to replace the electrolytes lost with her sweat.

The road ahead gave way to pebbly soil dotted with barrel and cholla cacti. Black volcanic stones appeared as she ascended the last few hundred yards. At the mountain’s summit, with no intervening trees or houses to block the sound, the drone of traffic from the immense city below reached her ears, shattering the morning’s solitude. The sun was now fully over the horizon. Finding a shady ramada under which to rest, she studied the metropolis before her. Sentinel Peak and Tumamoc Hill were now surrounded by traffic and human habitation, both of which flowed like surf along the rocky shores at their bases. She tried to imagine the scene when there had been only the blue ribbon of the Santa Cruz River cutting through a sea of green below.

In Dolores’s heart, on this morning, she felt more distant than ever from the past. As far as her eyes could see, every inch of the Tucson valley was covered with homes, golf courses, pools, highways, industry, and downtown high-rises.

Dolores dropped her head with closed eyes and finished her morning’s devotional prayer. For a while she rested, mindless, listening to the pounding of her heart and letting the sweat cool her body. From this spot high above Tucson’s sprawling limbs, Dolores sought to reconnect with the soul of the city of her birth. 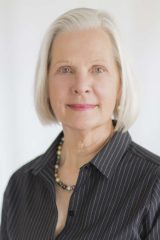 Susan Feathers is a writer and educator with 30 years of experience communicating science to the public. She served as the Director of Education at the Arizona-Sonora Desert Museum. Her writing focuses on the importance of place in forming character and destiny. For more about Threshold, see Feathers’ blog, WalkEarth.org.