A Light Snow in Late March

There is a kind of light, thin snow
that the wind can’t pick back up
once it has put it down and given it
a kick, and let it unroll across
the lawn, at least a puffy wind
like this one can’t, unable to
bend down far enough to get its
fingers under an edge (a fringed
edge on this morning’s carpet)
to straighten it a little, although
it’s making quite a show of trying,
sensing that someone may be
watching from a nearby window
where, indeed, somebody is.

I saw a raindrop, once, on the hood of a car
in a used car dealership, just that one
shining drop, but it had everything around it
in it, all of the other cars and pickups,
every red, yellow and blue plastic pennant
flapping above it, a row of newly planted
saplings standing in line by the highway
with bandaged trunks and saggy guy-wires,
the whining traffic and the sky overhead
that was looking more and more like rain,
four or five swallows darting within it.
One drop of rain had taken in everything,
and there was my face, though a little
distorted, one flat white cheek pressed up
against that curving window, peering out
at all of the world and all that was in it,
from the inside out, for the very first time.

laid out, its folds rolling, its opened
lapels showing a foamy white lining,
far more color right there on that flat

cardboard carton than on the millions
of pieces inside, all the same gray
like lead soldiers, and all fastened

together, tab to tab, plastic cast
as one piece, much like the long folds
of dolls that my Grandmother Kooser

snipped out of the Ames Daily Tribune
just to entertain me and my sister,
though all that had happened before

I’d grown older and ready to take on
an expensive, elaborate ship-model
kit with an accordion-fold of thin

paper instructions, hundreds of words
I had almost no patience for reading,
wanting to start where I wanted to

start, gluing together the few pieces
I recognized, laying the miniature
oars over the laps of the lifeboats,

etc., but this time I made myself
follow directions, having made wastes
of other such kits—fighter planes,

locomotives and cars—and I laid it
all out in my room on a card-table,
the halves of the hull, all the sails,

full, quarter and jib, like seashells,
all of the miscellaneous pieces
that a ship had to have to be real,

right down to the thin little ladders
of rigging to climb to the yardarms,
there to sit, keeping my balance

despite a stiff breeze, looking out
over the sea of my room, the night
with its crickets like ropes and spars

creaking below my screen window,
the waves I could feel going slack
at their edges, the faraway harbors

with their busy bazaars going quiet,
the salty nets drawn up and drying,
their glass floats like small bubbles

in the night’s iridescence, as I bent
squinting over the bits of that ship
I was building to dream me away.


Ted Kooser’s poems reveal a receptivity to a wide and various range of experiences—physical, yes, which is often the focus of those who write about his work; but also mental and emotional. And his adept handling of the conversation between thought and feeling is remarkable. Given the emphasis on abstract expressionism—to use one shorthand phrase—that pervades much of the poetry that makes its way into the public’s eye, the work he’s published for more than 800 columns, when placed beside his own books, stands as a testament to the continued impact of the power of clarity of expression when combined with imaginative searching. 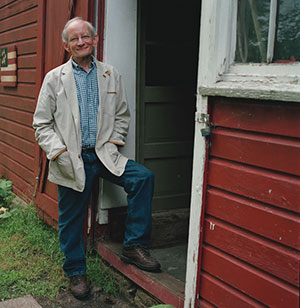 Ted Kooser, at age 81, recently retired from teaching at the University of Nebraska and is at long last done with making a living. His most recent book is Red Stilts, from Copper Canyon Press, and he and Connie Wanek have a collaborative children’s picture book in production at Candlewick Press, which has done four of Ted’s books for young people.

Next
Why We Have Blue