As now, each evening brings a last embarrassment
Of light that shames the setting sun to drop its fan,
A tawdry final display. But as the darkness
Sways its daily way, up from deepest holes within
The earth, the loving men of Myrtle rise to give
Their wives the few remaining sparks that nothing
Else can draw from those who live in shaded valleys
Along the Clearwater River, racketing down a pocket
Of rock, applauding itself through shallow rapids.
And where a muscled swimmer barrels into slower
Pools, old basalt can trick the undercurrent and legs
Are turned to stone. Wraiths that might be geese
Conspire the body down to where the dregs of those
Who doubt the influence of birds lie tangled deep
In shrouds of cottonwood. No matter how or where
It stops, flesh is never far from where it starts.

Not a Breeze at the Windfarm

At least the hawks are happy if not
the alternative energy workers who appear
to be idle themselves during a freak Palouse
calm spell but perhaps the local raptors
aren’t dying quite as quickly as usual
this particular afternoon due to the lack
of propeller action on the giant windmills
stymied by the intermittent zephyrs.

Red-tails especially and sharp-shinned,
ferruginous and the harrier—all
are especially susceptible to death by
good intentions. Turns out you can save
the earth but not anybody on it
especially those you love which is
why the notion of sustainable anything
(even me) doesn’t translate all that well
out here in the hell-and-gone stalled
former farm fields of Oakesdale.

But if we believe hard enough
perhaps a couple thousand acres
of polycarbon arms and revolutionary
bearings will turn it all around and even
death itself will be unsustainable for at least
one lifetime, maybe, say, mine. 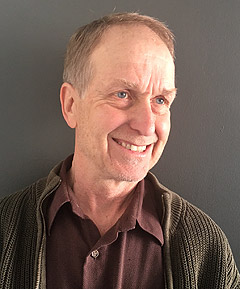 Dennis Held lives in the Vinegar Flats neighborhood of Spokane, Washington, where he is a book editor and community organizer. His first book of poetry, Betting on the Night, was published by Lost Horse Press; his second, Ourself, by Gribble Press. His most recent collection, Not Me, Exactly, is forthcoming by Hand to Mouth Press. He lives along Hangman Creek and watches for kingfishers.

Next
Living on Osprey Time: Journaling