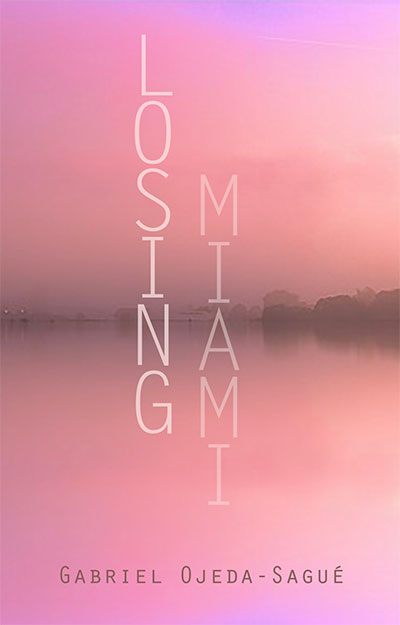 Gabriel Ojeda-Sagué’s new collection of poems Losing Miami begins with a paradoxical statement in its introductory “A Note on Language.” Ojeda-Sagué writes, “I’m sorry, I don’t mean to be flippant, but I also do.” The poet is preparing you for the tone he uses to make you face our choice to sacrifice Miami to the rising waters of climate change. The poet presents a preemptive eulogy to his home not yet lost. The collection is pre-apocalyptic, a new genre for the Anthropocene.

About midway through the collection, in “Losing Miami II,” he writes,

Is this the miracle of the inventing mind? Really? Island
nations and coastal cities close to drowning in the ocean?
As a species we can invent anything and have, do anything
and have, but the whole time, the thousands of years we’ve
done it, this is its byproduct? I am trying not to show it
but I am enraged. I feel cheated by consequences I cannot
fully comprehend. I feel guilty enough in causation but
unequipped to remedy my/our actions. This is a deep and
slow rage, one that I can’t fully feel at any precise moment,
but one that flatly spreads across the present and possibility.

The poems build to this rage. By this point, the poet has stored imagery of Miami in our collective memories. He has coaxed us into bilingualism as we’ve passed through vaporwave malls and beaches to the backdrop of multitudinous radios. The reader grows to love Miami because Ojeda-Sagué makes it recognizable as a home, even if it is not their home, a culture if not your culture.

Ojeda-Sagué shares much of his home with us. For example, near the outset, in “Losing Miami I,” we glimpse the paradox of being a child or grandchild in a Cuban American family:

When I ask my abuela the same
question, exchanging “irías” for “volverías,” she says
que “no tengo nada que hacer en Cuba.” Somehow,
I feel the same, even if I could never say “volvería”
because I have never been to Cuba. Returning would
not be the form, in my case. But to grow up in Miami,
as the child of exiles, is to always be “returning” to
Cuba.

Though the political forces that bring Cuban people to Florida remain in constant flux, generations of refugees and immigrants have created a cultural iteration unique to Miami. The poet shows us the paradox of being part of a culture whose geography you don’t share, and how you learn to identify that culture with your own location.

Ojeda-Sagué makes us relate to Miami with images like overcrowding in “The Thousands: I Do Not.” He indicts us as he switches thinking from the group to the individual:

He dramatizes a parking lot fight in “The Thousands: Relieve Himself”:

We are stuffed into the dust of unwanted closeness with others in “Losing Miami II”:

There are several boxes we have to move out of your
apartment that have been there very long. When we lift
one, together, there are silverfish moving under it. You say
“silverfish are a way of showing you something is filthy.” I
don’t think the box has anything in it, but it still needs to
be moved for being a box. The neighbor knocks on the walls
again because I am making her baby cry.

By the time we reach the aforementioned rage near the conclusion of “Losing Miami II,” the tragedy of loss has grown with each image. Perhaps it is only Ojeda-Sagué’s humor that allows us to explore pre-apocalyptic Miami without succumbing to despair. The city might be doomed, but we’re happy to be there. With references to bath salts cannibals and Ricky Ricardo and hurricanes alongside intimate family moments and the queering of Achilles’ friend Patroclus, Miami both is and is not its caricature. Another paradox, one familiar to all major American cities. Through contemplating the loss of Miami, the reader imagines the loss of their own home.

“Radio y Laguito” follows “Losing Miami II” and presents us with a language shift from primarily English to Spanish. Ojeda-Sagué prepares you for this at the outset of the book, but he also warns: “To those who do not speak Spanish: don’t be scared or put off. If you are scared, it’s okay. If you are not scared, perhaps you should be. This book is written with fake blood and trick knives.”

Because he includes a “Notes on Language” preface, it seems the poet is interested in readers’ experiences with the book depending on their fluency in both languages. When I had to look up a word or two, they were always images that caused me to reflect on Miami—burbuja, mariquita, caracol. Translation is a type of reading, and Ojeda-Sagué exploits that to embed meaning in the action of translating. This is most true in the appendices, where he has swapped all the Spanish words in his Spanglish poems for English, but converted all the English words into Spanish. Again, Ojeda-Sagué knows the accuracy of a paradox. You should not be afraid to read these poems if you do not speak Spanish, but you should also be aware that you will be forced to see how the language of the imagery and metaphor shapes our thoughts and perceptions.

Near the end of the collection, Ojeda-Sagué presents this thought experiment:

When Ojeda-Sagué asks us to imagine the loss of something very large, he is figuratively sacrificing Miami to prepare us for the things science tells us we must soon wrap our heads around. The loss of Miami is more than the loss of buildings, roads, and homes—it is the loss of culture, of distinct ways of living that can’t move to higher ground, that can’t dissipate throughout the larger culture and survive. Survivors of Hurricanes Katrina or Maria are the vanguard of understanding the loss of something very large, but the ocean eventually receded from New Orleans and Puerto Rico. Permanent losses are certain to come and Miami teeters on the edge.

It is raining here in Tucson as I write this commentary on Losing Miami, yet I know the water table in the desert is at an all-time low. Each year, wildfires burn through California, Arizona, New Mexico. My beautiful desert home will dry up. Tucson culture, Mexicano y Estadounidense, will desiccate alongside the saguaros and mesquite, crumble, blow away. Gabriel Ojeda-Sagué knows what he’s invoking: Imagine the loss of something very large. Try it and you’ll understand. 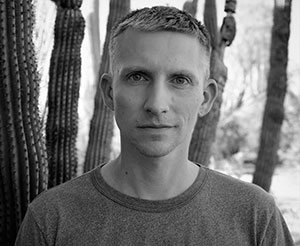 Eric Aldrich’s recent work has appeared in Hobart, Weber: The Contemporary West, Manifest West, The Worcester Review, and Little Rose. He reviews books for Heavy Feather, Full Stop, and Terrain.org. He lives in Tucson, Arizona where he teaches writing and literature at Pima Community College. You can follow Eric via ericaldrich.net or @ericjamesaldrich on Instagram.

Previous
The Mermaids of Austin

Next
One Poem by Daniel Corrie