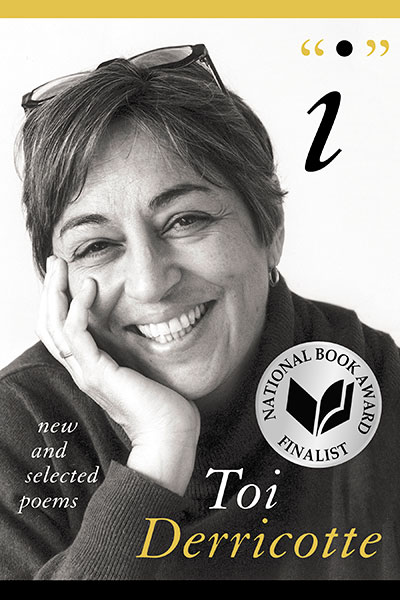 Toi Derricotte enlivens the familiar ritual of the New and Selected with her stunning collection “I”. Not only is the title “I” a bold choice—with those quotation marks to let us know that the author is up to something—but Toi Derricotte has also added new prefaces which open several of the sections of her earlier volumes. More than just a gathering of her best poems, in “I” the older poet is in conversation with her younger self. And though the poems are deeply autobiographical and intimate, the “I” is at times elusive, slippery. In the opening poem, the first “Preface” of the book, Derricotte elaborates on her title, on the “I” that has been severed from the poet:

Felt almost alive
When I’d get in, like the Trojan horse.

The “I” is a foreign thing, dangerous and only pretending to be real. And later in the poem:

Years later “I” came back
Wanting to be known.

My 2 letters, leaving
The “O” for breath,

By setting this poem apart as a preface, and the first poem of the book, Derricotte makes clear that this is the work of her lifetime, mined through poems, this attempt at wholeness, at reoccupying the abandoned self. Into an already strong collection of poems the prefaces bring an unexpected jolt of energy, creating ongoing dialogue, rifts on fragmentation and wholeness, on the complexities of making art, the push/pull of the artist who excavates even as she wants to hide. This energy comes from the poet’s relentless search, her self-examination so grounded in her body and so frank it can make the reader uncomfortable.

More than any other poet I know, Derricotte persistently seeks out and dissects shame in all its disguises and forms. Shame is a subject few know how to speak to or write about. It embodies what we feel is worst about ourselves and hides with its poison where we dare not look. Derricotte is a rare poet who unearths shame and looks on it with curiosity and even tenderness. It’s not just the shame of the child, abused by a beloved father, but the shame of being a woman, of being a black woman, of being a light-skinned black woman, of being pregnant before marriage, of being a mother who starts off her motherhood ashamed of the child she is carrying. In unearthing such wounds Derricotte holds a mirror to herself, to the reader, to society. But she is not simply story-telling, reenacting her suffering—hers is the work of transformation, the kind of transformation that comes from the labor of writing and rewriting, that comes from re-seeing the past and making of it something new.

Derricotte uses whatever methods necessary. Her narratives draw us in but can turn lyric in an instant, pulling us inward. The poetry is spare except when it’s not, and yet it is always essential. When she says “I have been hampered by an idea of perfection” we understand that the poet will do whatever it takes to write the poem, throwing out or embracing poetic tradition as needed, moving from poetry to prose and back again, unselfconsciously bending genres to her needs.

Derricotte’s 1983 book, Natural Birth, was ground-breaking and still feels so today. It is a book fierce in its subject matter and its honesty, a book that does more than exhume the poet’s memory of an unplanned pregnancy. It also reminds us of a time that seems distant now since so many women have come of age during or after the rise of second wave feminism in the 60s, and the legalization of abortion in 1973. Our cultural memory is so truncated that many do not even know how shameful, how life-changing or life-stopping it could be to get pregnant without a husband to “legitimize” the child. Derricotte writes through every taboo, every trauma, not as a victim, but as a healer and as someone reclaiming her past.

In fact there is so much trauma in Derricotte’s work that the book could seemingly become mired. But suffering is never the point. All this poet’s work is composed with devotion to the process, to learning, to the search itself, to art and to poetry as life-changing, the poet as archeologist poring over a bone shard. Beneath the intensity of her gaze her work embodies both pain and wonder. Such wonder, even joy, surfaces at unexpected moments: in the love of a gold fish, in the pleasures of sex, in primal mother-love.

pain is as common as flies. if you don’t see it

walking on your lip, if you can’t breathe it,

don’t feel it for yourself, you walk in darkness.

not knowing the price of common sunshine,

air, the common footstep on the earth…

Derricotte knows well that price. Out of the common yet always shocking pain “walking on your lip,” her poems gift us the joy of the ordinary. This book will stay with me, alongside me, a guide to living, to growing into oneself and beyond one’s past. As Derricotte’s beloved mentor and friend Lucille Clifton famously wrote:

come celebrate
with me that everyday
something has tried to kill me
and has failed.

Derricotte’s spirit and her celebration, like Clifton’s, is forged in language, in poems that show the arc of a life lived in devotion to art, to compassion and understanding, a poet chasing the “I”—bringing us a flood of sorrow and wonder, discomfort and joy. 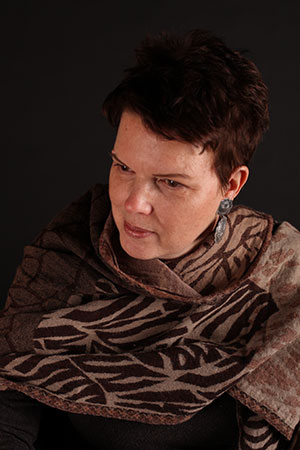 Anne Marie Macari is the author of five books of poetry including the forthcoming Heaven Beneath (Persea, 2020) and most recently Red Deer (Persea, 2015). Macari’s first book, Ivory Cradle, won the Honickman/APR First Book Prize in 2000. Her poetry and essays have been widely published in magazines such as The Iowa Review, Field, and The American Poetry Review.

This site uses Akismet to reduce spam. Learn how your comment data is processed.