Spill Stories is a Terrain.org series that fuses the interactive climate justice story maps of the Climate Alliance Mapping Project with the creative writing of students and faculty at the University of Arizona to bring oil and gas pipeline spill data to life.

Each week Terrain.org will publish new writing coupled with a map. This is the fourth publication in the Spill Stories series.

David Higgins’ dog came in from the dusty midday haze —tongue lolling, paws sticky—as he likely often did when lunchtime rolled around. His fur was usually snarled with burs and snapped mesquite twigs from the creek that ran near the house, but today it was greased with clumpy black oil.

David followed the dog’s tacky trail. He moved among dry grasses, crunching toward the sandy loam bed of Beals Creek, which in good years flowed as far as the Colorado River and in dry times disappeared entirely into the hot West Texas rocks. Today, the creek was running. It, like David’s dog, was slicked thickly with oil.

Over the following days in early September of 1996, employees of the Big Spring Refinery would recover 120 barrels—over 5,000 gallons—of oil from the water, where the dark ooze flowed more than three miles downstream from a leak in a corroded pipeline.

A dog helped detect the Citgo Pipeline oil spill in Tulsa a few years ago, too. Dogs are finders, I suppose. When one doesn’t immediately warm to me, I fret that it can sense some looming disaster hovering around me: infection, heartbreak. A dog can smell these things, friends say.  Recently, a research group ran MRI scans on canines and found that they have a small cluster of neurons that lights up in response to emotional cues. When they hear a giggle or a sob, this neural region—almost identical to ours—sparkles to life in the back of the brain, near the ears.

Can a dog sense sadness in the land, too? In the map I look at, locations of oil spills scatter across the country like neurons with black pipeline synapses slashing between. I scroll through the reports, skimming past bleeder valves and places that are stressed and weakened. Unintended trauma oozes out of the descriptions like goo from the split seams of a wound. Report after report pulls on the language of heartbreak:

I grew up listening to stories about Coyote, the doglike trickster who gave life to humans. All the while, as he was sculpting the first people out of clay, he laughed and laughed and thus we did not turn out very well. Coyote was restless and alert. He sniffed things out, dug them up, brought them messily to the surface for us all to see.

Lately, I’ve been going on walks with a scientist who talks about the earth like a living thing. Roots and interlocking threads of fungus make up the neural network of the planet, he says—the brain. Water is the circulatory system, so soil is kind of like the tissue holding it all together.

I ask him about oil.

It leaks into the subsurface, he says. As the water table lifts and falls underground, you get huge hydrocarbon bathtub rings collecting on the soil. They’re stuck there for a long time.

I consider bathtub rings and blood, dirt and hidden poisons. I consider, too, how dogs can smell the cancer long before it has grown enough for people feel it.

The 2008 oil refinery explosion doesn’t show up on my map, but it shows up in the thumbnail of the local newspaper: a mushroom cloud of blue-gray smoke spreading in the wind above the flat plane of the city.

The blast could be heard as far away as 50 miles. Towering flames burned through the night. David and three other plaintiffs received payouts for property destruction, but because the company was not found guilty of gross negligence, the jury “did not award their claims for pain and suffering.”

If there had been a dog in the courtroom at the time, I wonder which part of its brain might have glittered in response to hurt.

I wonder whether it might have smelled this coming a long time ago.

In the hours following the Beals Creek spill, David would buy dish soap from the H-E-B or the Kwikie or the Family Dollar down the way and would lather up his dog, would suds and knead until the cancerous sludge slipped away. He would keep the door closed so that the dog—whining at the window, leaning toward the irresistible wet clay at the creek’s edge—would not race down again into that black and languid water. 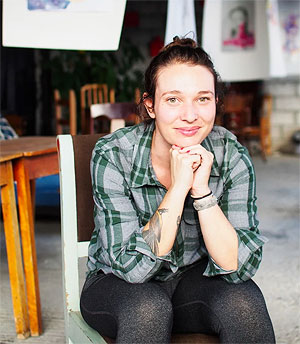 Hannah Hindley is a wilderness guide and nonfiction writer currently pursuing her MFA at the University of Arizona. She is the recipient of the Thomas Wood Award in Journalism and the former writer in residence at the Sitka Center for Art and Ecology. Her writing can be found in journals, anthologies, and newspapers including River Teeth, The Harvard Review, and The Press Democrat. Find her at @hannah_the_bold or riverrising.wordpress.com.