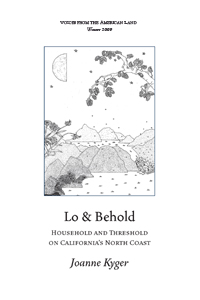 Voices from the American Land chapbooks are published four times a year by the American Land Publishing Project, Inc., a New Mexico nonprofit organization, in partnership with the Center for American Places at Columbia College, Chicago. The ALPP produces four chapbooks a year, offered by subscription, and conducts on-the-land readings and classroom educational activities. The Center publishes an annual collection of the chapbooks as a single volume, distributed nationally to bookstores by the University of Chicago Press.

On the inside cover:

Here begins Voices from the American Land — Joanne Kyger’s chronicle of a literary life infused with the natural scene in a village on the northern California coast. Lo & Behold offers an evocative memoir of the animals, plants, landforms, strange and wonderful visitors, neighbors, an dfamous poets and artists that are part of the poet’s daily round.

Forthcoming authors include Quraysh Ali Lansans [out now] who writes of growing up black (and Native American) in the hard, dusty landscapes of Oklahoma. He is Director of the Gwendolyn Brooks Center for Black Studies and Creative Writing at Chicago State University. Patricia Clark, poet-in-residence at Grand Valley State University, reflects on the numinous interaction of the human spirit with the spirit of the woodlands of Michigan. And Levi Romero, poet and architect-planner, whose work, in English and Spanish, tells of the life on the land in Hispanic northern New Mexico. A critic writes: “No other poet can pull el duende from his labyrinth the way Levi can.” Such as the Voices from the American Land.

Terrain.org will not be reviewing this chapbook in a forthcoming issue, but we do encourage you to investigate the good work of the American Land Publishing Project and the quarterly Voices from the American Land series at http://www.voicesfromtheamericanland.org/.